On occasion it may seem that English takes over: it is seen as a second language for a large majority, is the dominant language on the internet, in business, technology etc… However there are still many who choose French as their second language.

It is because of this that we have chosen to focus on the official French language exams. 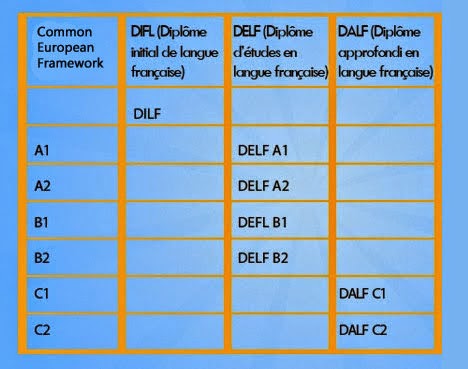 The DILF examines your basic knowledge of the language, but it is quite normal for people to skip this stage and go straight onto the DELF A1.

The DELF and the DALF are made up of 6 independent exams which correspond to the Common European Framework of reference for languages. Thus the student, depending on their level, can sign up directly for the exam of their own choosing.

These qualifications are globally recognized and are often used by ministries of International Relations in charge of education. They are present in more than 1,000 exam centres in 164 countries.

·                     The DELF is made up of 4 independent certificates which correspond to the first 4 levels of the Common European Framework.
DELF A1, the basic or introductory level, evaluates the basic skills of the student.

DELF A2, still a basic level, this exam evaluates the student’s understanding of the basics and their ability to use everyday courteous phrases.

DELF B1, this is the first real jump towards some Independence in the student’s language skills. The student must be able to cope with unexpected situations.

DELF B2, the student has acquired the Independence necessary to argue and defend their point of view, as well as correcting their own errors.

·                     The DALF evaluates the higher levels of the Common European Framework and tests the upper levels and experiences of the student with regards to the French language.

DALF C1, evaluates the ability of the student to express themselves in an independent and spontaneous manner, with ample vocabulary and structures to make a coherent argument.

DALF C2, is the last certificate offered that guarantees that the student is capable of undertaking academic tasks in the target language.

Additionally, a ‘teen’ version of the DELF qualifications exists. From the age of 8, students are able to participate in the exams with the guarantee that the content will be adapted to their age and general knowledge. The skills evaluated are the same in terms of French as a foreign language.

At each level, the exam evaluates the following skills: comprehension and written and spoken expression.